Examples of these types of integrals are:

(the integrand is not bounded on the integration-interval (in

In spite of the complications of the notion ‘infinite’ above integrals appear to have a finite value, that is to say an ‘infinite’ boundary does not lead to an infinite result. We say that such an integral converges. As we will see below, the first integral has the value

and the second integral calculation has the value

.
It is not sure that an improper integral gives a finite value. Then we say that the integral diverges. That is the case with the following integral:

In order to calculate an improper integral with, for example, an upper boundary

, we use the formula:

When we want to calculate an integral of the form:

is not defined, such as with:

then we use the formula:

For some improper integrals there are techniques to determine whether or not an integral converges or diverges. Such techniques are known as convergence tests. As an example we can mention the following test:

are continuous for all

Usually at first sight it is difficult to determine whether an improper integral does or does not converge. For example, on the interval

consider the graphs of the following functions: 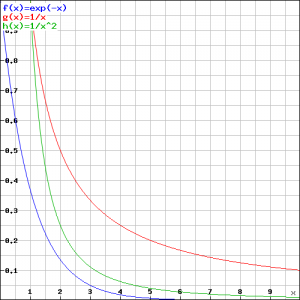 The question is: which of the three improper integrals converges or diverges?
From the graph we may conclude that if

(red) converges, the other will converge as well. We can also see that

This integral does not converge.