The following formula is an example of an exponential function:

. The name exponential function is used if the exponent contains the independent variable

are constants and are sometimes called parameters.

We will draw the graphs of two exponential functions.
The left graph corresponds to the function:

and the right graph corresponds to the function:

Both graphs are each other’s mirror, they are mirrored in the

-axis. We can easily show this algebraically:

and this is the mirror in the

-axis of the function:

We will bring together in one figure some functions of the type : 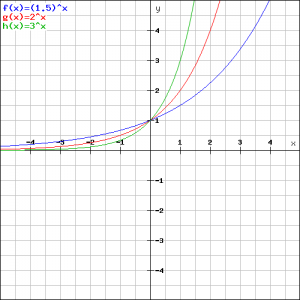 We first notice that all graphs go through the point

. This is because we have for

Furthermore we can easily explain that the fastest increasing graph (green) corresponds to the function:

and the least fast increasing graph (blue) to the function:

We also see that all three graphs converge to

will be more and more negative. In other words, if:

The graphs will not reach but only approach the

-axis. Such a line, in this case the

-axis, is called an asymptote.

Now we look at a somewhat more complex exponential function:

In the figure the graph of this function is outlined. 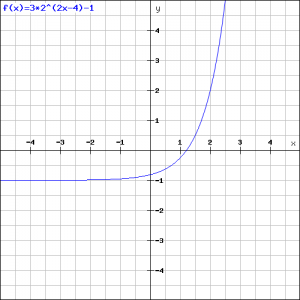 and the figure shows that this seems to be correct.
If we want to know where this function intersects the

-axis, then we have to take

and we can see this in the figure. (Often it is not necessary to calculate an exact number and it is sufficient to get a result with an logarithm).
Finally we see that if

will get more and more negative, so if

the first term of the function approaches

and the graph approaches the value

. We can see this in the figure.

Draw the graph of the function:

We try to find a number of points which enables us to draw the graph.

and thus we can draw the graph: 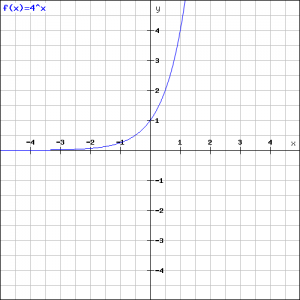 Draw the graph of the function:

We consider the function:

Next, we can draw the original function by adding

to the result.
We try to find a number of points which help us to draw the graph.
For 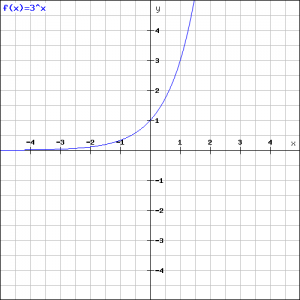 We get the final result by adding 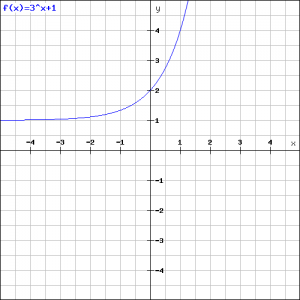 Draw the graph of the functions:

and calculate the intersection point.

We roughly know the graphs, see above. In the figure below they are drawn exactly. Verify which graph corresponds to which function.

In order to calculate the intersection point of both graphs we have to solve the equation:

We have to work out the equation (see also Exponential equations):

To derive the third equation from the second, both sides are multiplied by

, by which we get a quadratic equation in the variable

We can factorize this equation:

which has the solution:

The first solution is no real solution for

because an exponential function cannot be negative. The other solution yields:

Thus both graphs intersect in

, which could be expected from the figure.