i.e. the so-called base

is written upper left. Elsewhere, particularly in Anglo-American countries, the logarithm is written as:

stands for base. We will be using the latter expression. Often, the

is written without parentheses around the argument. We choose to use parentheses to avoid confusion.

Thus the logarithmic function is:

under the following conditions:

In order to understand these conditions we use the definition of the logarithm:

By using this formula we can quickly calculate logarithms.

and we see immediately that

and see immediately that

and thus the solution is

and thus the solution is:

We have two remarks about the base

There are four formulas that are commonly used when working with logarithms. It is useful to have them always on hand so that you do not always need to grab a book.
These are the formulas:

the same conditions hold as for

. On these formulas we have to make some comments. They do not just fall out of the air, but can be derived using the definition. We also see that the third formula follows directly from the first. The last formula applies to every

meeting the aforementioned requirements for the base. The usefulness of this formula is great, so will confirm each user of a calculator. When someone wants to use a calculator to calculate:

. However, he will find the

), but not a key for the log with base

. Using the fourth formula, he will be able to calculate the answer:

Using the third formula we write:

The graph of the logarithmic function:

depends on the base

. In the figure below we see the graphs of: 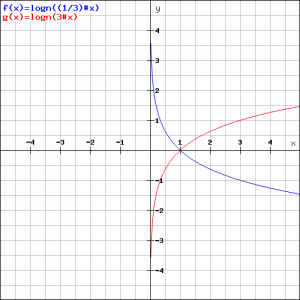 The blue graph corresponds to

. Using the definition shows that

are each other’s mirrors in the

-axis.
Both graphs go through the point

which is the case for all admitted bases.